Introducing the Ruger® Gunsite Scout Rifle, the ideal "fighting carbine" in .308 Winchester that is a credible rendition of Col. Jeff Cooper's Scout Rifle concept. Cooper called for a relatively lightweight, hard hitting, do-all rifle that in the hands of an accomplished shooter was able to place accurate, sustained fire out to long ranges, yet was quick-handling and light enough for all-day carry.

Developed in conjunction with Gunsite instructor Ed Head, the Ruger Gunsite Scout Rifle is a new platform in the Ruger M77® family. While the Scout Rifle has M77 features such as controlled round feed and integral scope mounts (scope rings included), the 10-round detachable box magazine is the first clue this isn't your grandfather's Ruger rifle.

"Ruger has taken an in depth look at the intended purpose of a Scout Rifle and developed a full-featured rifle designed to meet the Scout Rifle criteria of hunt, fight, defend," says Head. "This firearm offers outstanding features in an affordable, versatile and reliable rifle designed to deliver .308 Winchester performance in a variety of situations. It is compact, lightweight, offers 10-round box magazines, can be fit to the individual shooter, and accommodates a host of optics. It is a serious rifle for those serious about rifles."

As they say, beware the man with one gun, for he probably knows how to use it. Never has this been more true than with the Ruger Gunsite Scout Rifle, the one rifle to have if you could only have one. It is the perfect lightweight, hard-hitting, do-it-all bolt-action rifle - where rugged, reliable Ruger meets the practical, tactical. 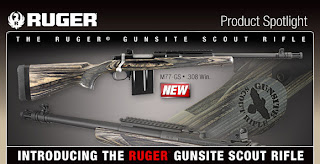 Contact Gunbroker for more infomation.
Posted by rggun at 3:54 PM